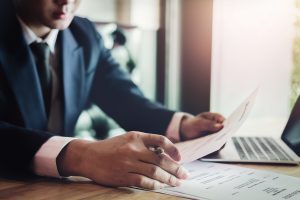 We have all recently been privy to the most contentious job interview of our lifetimes. During Brett Kavanaugh’s U.S. Supreme Court confirmation hearings, senators noted that this would be the last job interview he would have, if confirmed. As the entire country was attentive to the accusations concerning an alleged high school event, we all learned that the interview for that job was far more extensive than ones we typically conduct. Obviously, we normally do not hold public hearings, we do not interview other witnesses concerning potential employees and there is rarely a discussion of FBI investigations.

How employers vet prospective candidates can help determine whether the potential employee is a proper fit for the job. Usually, employers conduct general background checks of prospective employees. Those checks often look for past criminal convictions and sometimes involve credit checks. However, in conducting background checks, an employer may be exposing the business to liability.

If employers do not do it right, their business could get sued. Background checks can’t discriminate based upon race, color, national origin, sex, religion, disability or genetic information. Therefore, they should be administered to all candidates, so as not to incur liability. Background checks, even those by a third-party vendor, can lead to liability if one does not comply with federal laws such as the Fair Credit Reporting Act. Employers hiring outside of Nevada need to be aware of state laws like “Ban the Box” or others that prohibit or limit criminal record-screening policies. In this regard, even the Equal Employment Opportunity Commission has advised that employers should not use a policy or practice that excludes people with certain criminal records if the policy or practice significantly disadvantages individuals of a particular race. Employers should maintain all records — including application forms of those not hired. The federal government can sue or fine businesses based on improper record files.

Even if employers do it right, their business could still get sued. As we have seen with the #MeToo publicity, when there have been previous illegal acts conducted by certain employees, the complaining employees have been compelled to sign nondisclosure agreements in connection with settlements. Accordingly, a new employer may never know the employee engaged in harassment. However, if the employee harasses other employees on your watch, you may still have liability. The allegations concerning Kavanaugh would have never surfaced in a background check because there was no criminal complaint filed. Furthermore, the allegations were from when he was a minor, several decades ago, and could have been sealed. Thus, even if there were criminal charges filed, they still may not come up on a background check. Also, former employers will rightfully fail to report background information about the candidate aside from the dates of employment.

Former employers also will, rightfully, fail to give you background information about your candidate aside from the dates of employment. If there was a problem that would not be discovered on a background check, you could still end up hiring someone who will damage your business.

So, what should employers do? First, hire a third-party vendor who gives assurances it is compliant with all federal and state laws and indemnifies the business for any claims. Also, provide a comprehensive employee handbook that enforces legal policies and practices of the company; train and educate staff on a regular basis; maintain comprehensive documentation of the company’s actions and those of employees; and consider obtaining employer liability insurance.

Ultimately, an employer will only be responsible for what occurs during a worker’s employment. As a result, training and educating employees, and strongly enforcing well-written employee policies, are the best ways to ensure that employees are part of a positive future, regardless of their background.